As some of you will already know, Fingerprints suffered an unbelievable tragedy in July 2014.  The owner and passion behind Fingerprints, Gareth Carnall aged 33, was tragically killed in a car crash.  He was returning home from catering a party on Saturday July 12th at about 11pm and a Polish driver hit him head on.  The polish driver was on the wrong side of the road and Gareth didn’t stand a chance, he was killed instantly.

The following days and weeks were incredibly hard for both Gareth’s family at home and his Fingerprints family, however it was agreed by all that his hard work and dedication should not go to waste. With heavy hearts Fingerprints was reopened and the staff continue to fulfil Gareth’s dream.

The community on Queens Road have been amazing. Hundreds of bouquets of flowers were left outside the café in the weeks following the accident.  Messages of support and love for Gareth flooded in from all corners of the globe.  It seems that he had created in Fingerprints, something of a community centre for those who worked, lived and passed by Queens Road. The family have received numerous messages from customers advising that they would not have passed their degree without Gareth’s smiling face and encouraging words, customers suffering from depression or cancer who have sat in Fingerprints and shared a joke with him, and felt able to continue on, revitalised by kindness and a cheery smile. Gareth created a wonderfully happy haven and we will continue that legacy.

The day of Gareth’s funeral, we took him past his beloved shop one last time.  The family had been told that a few people may come outside to pay their respects, however we were not prepared for the reaction when we arrived on Queens Road. Hundreds of people lined the streets, shops had closed, the funeral director had never seen anything like it, he said the atmosphere was electric as he led Gareth towards Fingerprints.  As we paused outside his shop; an eruption of applause began which rippled along the street and the outpouring of love and grief for Gareth was absolutely amazing.

We are and always will be, sad and angry that Gareth’s life was cut so short through no fault of his own. Fingerprints Delicafe was his life and he put his heart and soul into creating this wonderful little sanctuary. We will do all we can to ensure that this continues and ensure that his dream lives on.

Thank you for your support. 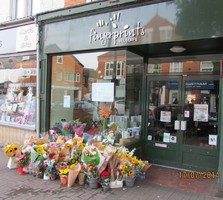 The flowers outside Fingerprints 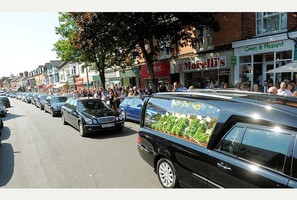 Gareth's Eulogy
If you would like to learn more about Gareth's life, the Eulogy read at his funeral is attached.
EULOGY.docx
Microsoft Word document [48.9 KB]

We look forward to hearing from you :)